Are there negotiating lessons one can learn from the world of Quentin Tarantino? Mediators tend to believe that if we encourage parties in conflict to continue talking even when resolution seems unlikely, they will eventually reach a level of common understanding that will enable both sides to find an acceptable way out of conflict.

Films like The Hateful Eight and most other Tarantino films, severely test that assumption. The characters jabber endlessly. They examine each problem in excruciating detail. They lay out all of the various scenarios for escape from their predicament (their best alternatives to a violent outcome). At one point in The Hateful Eight, a character is jumping to conclusions about which of the three guys lined up against the wall might be responsible for poisoning the coffee. Sam Jackson’s character tells him to slow it WAY down. He does not believe you can short-cut the process of detailed examination of all of the evidence. He wants to talk some more. And eventually we find out that nobody has been telling the truth, and nothing is exactly as it seems to be. 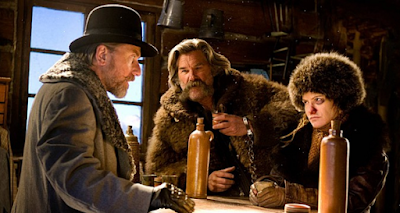 But all of this talking cannot save the characters in Tarantino’s world from their fates. Anyone who has seen his previous films knows that this one is likely to end with an explosion of violence. Once in a while, the hero in a Tarantino movie is allowed to ride triumphantly off into the sunset, but only after vanquishing all of his or her enemies. More often, all of the characters in these films are doomed. There is never anything like a “win-win” solution available. Only “win-lose” or “lose-lose.”

So is there a point to all of the ceaseless chatter in these movies, if negotiated resolution to conflict is impossible? At the very least, it is usually entertaining. No matter how talky or long these movies are–and they are all talky and long–I am rarely bored watching a Tarantino movie. Maybe because the tension of a violent resolution to conflict is always present. But in addition to having entertainment value, all the talk still seems to have another purpose. Understanding the sources of their conflicts, and the possible means of escape, is still important to these characters. They are not allowed to die in ignorance. They must meet their fates fully informed of the circumstances. And that gives them a certain level of dignity, and proves that there is value in talking a problem out fully, regardless of whether or not that problem can be resolved by negotiated agreement.

Assessment of the Dispute Resolution Field and Possible Steps Forward

The January 2022 issue of Dispute Resolution Magazine’s survey of past contributors prompted me to write a three-part series of blog posts described below.  The survey asked them: what they...

Using Mediation to Develop a Prenup that Satisfies Both Parties

My last mediation of 2020 was for a prenuptial agreement, and to me it was kind of a sign of hope for the year to come. The couple had given...

What Questions Should You Ask Before Hiring an Attorney: a Mediator’s Perspective

Experiencing any type of legal dispute is stressful and many people walk into a lawyer's office nervous and anxious about the experience. In order to reduce that anxiety and ensure...