Survey results: What Do Wisconsin Judges Think About Mediating Cases?

To increase access to justice, the State Bar of Wisconsin’s Dispute Resolution Section celebrated Mediation Week the third week of October under the direction of the section chair, Jim Reiher.

Mediators volunteered around the state to raise awareness. While initially successful, over time volunteers spent the day waiting for only one or two clients.

The Dispute Resolution Mediation Week Committee consisting of attorneys Amy Koltz, Lisa Derr, and Jill Hamill Sopha stepped back to discuss the status of mediation in Wisconsin. How could we better meet the objectives to raise awareness and increasingly use mediation? How was mediation currently being used across the state?

With the support of the chair, the Dispute Resolution committee partnered with Resolute Systems Institute (RSI), which had already done extensive work on judicial surveys.

The committee requested financial assistance from other state bar sections. Three contributed to the $6,500 cost including Litigation, Labor & Employment, and Appellate sections. The Wisconsin Association of Mediators contributed as well.

At the same time, the Planning and Policy Advisory Committee (PPAC) –  which advises the Supreme Court and Director of State Courts on planning initiatives –  had formed a subcommittee on using mediation in Wisconsin.

It naturally followed that Dispute Resolution committee partnered with RSI and PPAC1 to coordinate and distribute a survey to all 249 Wisconsin judges addressing:

The committee was gratified to receive a 54 percent response rate from 134 judges covering 55 of 72 counties. The survey also divided responses into four practice areas to see how responses might vary based upon different practice areas.

The main findings of the judicial survey are:

Some findings applied across case types. A majority (60 percent) believe that the traditional litigation system is not enough. Most (57 percent) believe there is an unmet need for mediation as an alternative or addition to the system, especially for family financial issues and small claims. Remaining judges (43 percent) felt that their counties’ need for mediation was being met.

The majority feel there is an unmet need mainly for mediating family financial cases and small claims.  One obstacle was a perceived lack of mediators. But the primary perceived obstacle for using mediation is insufficient funding and the second is the cost to litigants. This could mean that private mediators are available but not necessarily affordable and we lack funding sources to bridge that gap.

On a positive note, when asked about what supports mediation in their county, judges felt that attorney attitudes were not obstacles but a major support. Just over three-quarters of judges felt that ordering mediation strongly supported that form of dispute resolution. Almost two-thirds of the judge felt that the availability of skilled mediators supported mediation.

On a side note, 13 of the 55 counties (24 percent) were unsure of the availability of mediation in one or more of the four areas (personal injury, contract/business, family financial and small claims.) This may indicate a need to connect/identify resources across the state.

As for referrals, while most judges who responded refer over half their Personal Injury cases to mediation, only 14 percent of judges do so for family mediation and even less (6 percent) refer more than half to small claims cases to mediation.

Most judges felt that family financial mediation was available in all counties (although judges in four counties were not sure).

Based on this information, there are issues regarding both mediator availability and lack of complete information. For the latter, judges could be provided lists of resources for trained mediators (e.g. Mediate.com or the State Bar Dispute Resolution Section). Another follow up might be to contact at least one judge in counties with no judicial response to follow up on their potential need for information.

To increase availability, future efforts could focus on structural issues such as funding for mediation programs. We could discuss implementing a need-based mediation program with interested counties. 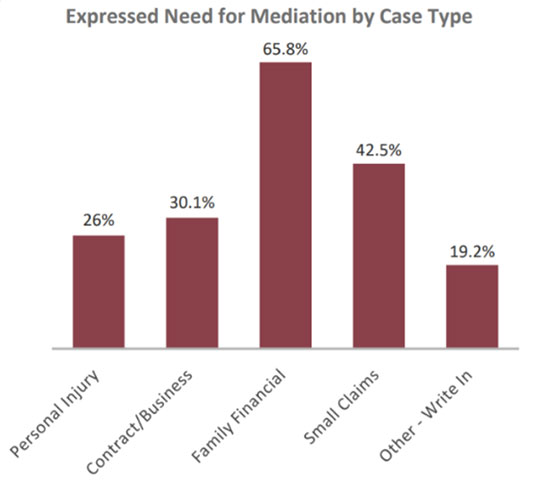 To minimize survey length as well as financial constraints, there were several issues not addressed, including:

With interesting additional comparisons not here addressed, the judicial survey is worth a thorough or even casual review. But it is just the beginning. The Dispute Resolution Section is continuing to follow up on the structural needs for mediation in Wisconsin as expressed by the judiciary including lack of funding, the cost to litigants and the lack of mediators. We are following up to provide information about available resources to the judiciary.

The Dispute Resolution Survey committee sincerely thanks those who provided critical assistance. This includes Jennifer Shack, Director of Research at Resolution Systems Institute, who spent hours helping us tease out specific information as efficiently as possible for busy judges. We also thank Ann Olson, Policy Analyst, Office of Court Operations for her valuable insights and connecting us to the work done by the Planning and Policy Advisory Committee. Last, we are grateful to our supportive chair, James Reiher.

Read the survey of judges on the availability, need and use of mediation.

1 The Judicial Survey Committee thanks Ann Olson, Policy Analyst, Office of Court Operations for her valuable contributions to this judicial survey.

Lisa Derr (U.W. 1987) is a mediator with Derr & Villarreal. She is chair of the Wisconsin State Bar Dispute Resolution Section and former president of the Wisconsin Association of Mediators.   MORE >

Hey, How Would You Feel If I?

From Vivian Scott's Conflicts Of InterestBlogp>Usually blurted out in a moment of frustration, “How would you feel if I…?” is often a last ditch effort by the speaker to be...

One Shovel at a Time

After writing the Obituary of traditional mediation, I thought it might be possible, so to speak, to raise the dead.  It would take effort, but it would be worth the...

Today marks the first anniversary of the World Directory of Alternative Dispute Resolution Blogs, a directory that tracks and catalogues ADR blogs world-wide. It grew out of a project that...