We can trace our justice system back to Moses receiving the Ten Commandments, or Hammurabi’s Code (1700 BCE), if we wish. I’d prefer to start with Aeschylus’s Oresteia, from 458 BCE.  I’ve been thinking about how this ancient Greek tragedy about the origins of a new concept of justice, might shed some light on transitions that seem to be occurring in our modern legal system.  Readers might have to bear with me for a few blog posts before I reach that goal. 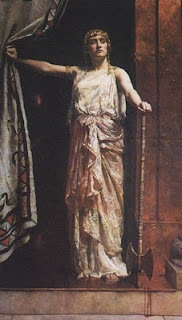 In Agamemnon, the first play of the Oresteia trilogy, Aeschylus tells the story of Agamemnon’s homecoming and murder.  Agamemnon has been away for ten years fighting the Trojan War.  In the meantime, not surprisingly, the queen has gotten used to not having him around, and has made other plans for ruling the kingdom with her new partner Aegisthus.  Their murder of the returning king could have been explained as a simple power grab, but they choose not to explain it that way at all.  Instead, they justify their actions in terms of revenge.  As the chorus is about to condemn Clytemnestra for her murderous act, she immediately reminds them of Agamemnon’s sacrifice of their daughter Iphegenia, whom he killed to appease the gods and allow the fleet’s passage to Troy. Why not judge Agamemnon for that, she asks.  And why does she not have the right to avenge her daughter’s death?  Foreshadowing the next play, Clytemnestra’s only concern is her recognition that someone may in turn attempt to avenge the murder she commits.  To protect her from that, she relies on her partner in crime and on the throne, Aegisthus.

I too can swear a sacred oath–
The gods can hear me too.
By my daughter’s protector, Justice,
Here perfected–as you can see,
By Iphigenia, by the Fury
That must avenge her
And has avenged her–that holy fury
For whom I poured this blood,
I swear by these, I am not afraid
Of this murder’s avenger
While my own protector, Aegisthus,
Stands at my hearth beside me.

When Aegisthus finally appears, he too makes no mention of any political desire for the throne, but instead speaks only of obtaining revenge for the murder of his own half-brother by Agamemnon’s father.

Justice!  At last the day of justice has dawned.
This is perfect proof that the gods
Watch men and punish evil.
What a beautiful sight
To see the man gagged and bound
In meshes knotted by the Furies!
To see his body
Emptied of all its blood.
At last he has paid
For the inhuman crime his father committed
Against my father.

While recognizing the rightness of the divine law that provides that a life must be paid for with another life, the chorus expresses some doubts about the sense of this law:

But this law of Zeus
Is a kind of disease
Inherited through the blood.
See how it has crazed
Every member of this house.

The obvious problem with the revenge cycle, of course, is that it has no end.  By the end of the third play, this law must be overturned, ushering in a new era with a different idea of justice. Until then, the first play ends with the chorus calling for Clytemnestra’s son Orestes, who is in exile, to return and avenge his father’s murder, while the new king and queen enjoy their temporary triumph.  Clytemnestra concludes the play by saying

You and I, Aegisthus, we are the law. . . .
Whatever word we speak, that is the law.
At last, the throne of Argos is ours.

So Clytemnestra finally admits that the law is based on power.  But Agamemnon is mainly about revenge and retribution.  It is also about a destiny that its characters cannot escape.  Cassandra, whose speeches occupy the center of the play, is a character condemned by Apollo because she spurned his advances.  Apollo cursed her by leaving her with the power to see the future clearly, but making sure that nobody would ever believe any of her prophesies.  She knows exactly what is going to happen, but she cannot prevent Agamemnon’s fate, or her own, and she cannot succeed in alerting anyone to their danger.

Although we no longer believe in fate, and we have even made most forms of private revenge illegal, we have not completely escaped our ancient instinctual desire to strike back against those we feel have wronged us.  We still hear of family feuds being carried on for generations, and we know that many litigants are motivated by the desire for retribution.  We are still moved by a story like True Grit, subtitled Retribution.

We also still see litigants who are trapped by the machinations of a pitiless court system, with rules and procedures not of their making, and which they are powerless to escape.  Litigants often become consumed with the task of following the twists and turns of their cases through the courts, trying to make sense of interim court rulings, needing to understand arcane procedures, and reading the tea leaves of victories and setbacks along the way.  Recently I was trying to persuade a litigant to let go of her lawsuit, on the best terms she could obtain.  The alternative of continued litigation was only going to cost her more money, and even if she won her case, she would not be likely to collect on any judgment.  But this litigant told me she felt compelled to see the case through, at least to its next phase, because she had already invested so much time and money in it, and because she needed to prove she was right.  Like Clytemnestra, she is therefore in danger of becoming as much a victim as an instrument of a crude but powerful system of justice based on retribution. Stay tuned to find out whether Orestes can avoid a similar fate.

(All excerpts are from the Ted Hughes translation)

Texas Conflict CoachIn Your Brain on Conflict series, we kick off with Scott Rogers, Founder and Director of the Institute for Mindfulness Studies. What happens in our brain when we...

Maxine Baker-Jackson shares how mandatory mediation came about in California with support from the judges.

Why Isn’t ADR More Popular? A Report From Harvard

From the Disputing Blog of Karl Bayer, Victoria VanBuren, and Holly Hayes.The article below was published this week on the Program on Negotiation at Harvard Law School website. It sheds...