On Reducing the Gap Between You and Your Former Spouse

“Coincidence” knocked on my door again a few days ago. I had literally just finished reading James Hollis’ What Matters Most: Living a More Considered Life (Penguin Books, 2009) when what appears in my Inbox but a notification about a new post on one of my favourite blogs, Ben Ziegler’s Collaborative Journeys. 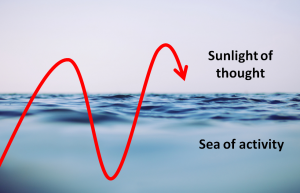 Why do I call this coincidence? It just so happened that in his post Ben tackled what seems to be the very same question which Hollis repeatedly comes back to in his book, albeit from a Jungian analytic practitioner’s point of view: What can you do to reduce the gap between yourself and others?

Here is Ben’s post, reprinted in its entirety (with his permission – thank you, Ben!):

Reduce the gap: Integrate thinking and doing
Sometimes the gap between people seems so big that no common ground exists, no collaborative solution possible.

Sort of like the current gap between U.S. Democrat and Republican politicians, negotiating the national debt? Or maybe the gap in a project team, in which teamwork is just a notion? Or, maybe the gap between businesses, or family, involved in a dispute?

And yet, individuals, organizations, and communities do find ways to reduce the gap, build consensus, and reach agreement.

One of the best habits to foster, for reducing the gap, is a “learning” mindset.

A learning mindset aims to integrate thinking and doing. We have thoughts. We act on them. We get feedback. We adapt… move closer, reduce the gap.

The way to getting it done, say Roger Fisher & Alan Sharp, is to integrate thinking and doing, the “sunlight of thought” with the “sea of activity.” An iterative process, incremental, one step at a time, is usually the shortest path to success, resolution, and reducing the gap.

And this learn as you go approach is not just about learning from our mistakes. It might be better to learn from success… you know what worked, you can do it again, and the next time… you’ll probably do it even better. That’s the philosophy throughout ReWork, a wonderful little book by the authors of the 37signals suite of software products, and one of my favourite how-to reads of this year.

In learning organizations; prototyping, experimenting, piloting… are ways to integrate thinking and doing. In your community, there are likely many ways. And, as individuals, we do the same; try things out, get traction from what worked, build our future, one step at a time.

Integrating thinking and doing is an adaptive strategy. In living systems, it equates with survival. In uncertain times, is there any other way?

What say you… is there a better way to reduce the gap?

For a decade, Susanna Jani was Roster Administrator for the B.C. Mediator Roster Society*, managing its day-to-day operations, activities and projects, including the initial research phase of the Distance Family Mediation Project. In 2009, she followed her passion for this environmentally-friendly project and became Project Coordinator for its second, pilot… MORE >

I've been working on a case lately with a corporate lawyer, and we've been trading war stories about various negotiations in which we have participated. Most of the deals that...

Is Divorce The Real Target?

When the fire of love feels dead or the threat of divorce is put on the table what is really happening? Too often professionals hear those words and assume the...

By Armand and Robbin DAlo
Category

Howard Gadlin discusses the difference between a mediator's role and an ombudsman's role. Ombudsman uses mediation as a tool, but their role is to assist a group of people within...