One of the first things new students in conflict resolution learn is that it’s helpful to not jumble together and conflate the terms conflict resolution, mediation, and alternative dispute resolution (ADR). Toward that, i usually end up scrawling out some iteration of this on the whiteboard: 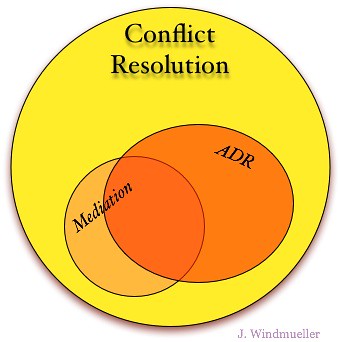 Conflict resolution includes a rich variety of practices, process models, intervener roles, and systems beyond mediation and ADR. ADR is a constellation of dispute resolution practices (one of which being mediation) oriented toward limiting the number of disputes that require formal litigation–the “alternative” is an alternative to going to court. While some mediation approaches and uses are oriented toward ADR’s goals, that doesn’t describe all mediation practice.

It’s an entirely oversimplified drawing, meant just to help distinguish and relate these three terms and to spark a conversation about how we define the field of conflict resolution. But I also sometimes find myself going back to it when teaching research methods, because it begs an interesting question. This isn’t to scale. If we wanted to map the relations more accurately, based on empirical evidence, what data would be helpful? It’s not that there’s a right or best answer to the question, but as a thought exercise it’s a nice way to explore what we see as indicators of the use, demand, and effects of CR practice.

Mediate.com In business since 1996, Mediate.com is the world’s leading mediation and dispute resolution website with over 7 million annual site visitors.  Mediate.com serves as a bridge between professionals offering dispute resolution services and individuals and businesses needing those services. Mediate.com was awarded the 2010 American Bar Association Institutional Problem Solver of… MORE >

In Pearson v. Pearson, 2020 ABCA 260, Alberta’s Court of Appeal distinguished between discretion to grant/refuse an adjournment and discretion which raises issues of procedural fairness. Deference is owed “generally” to...

The resolution of many disputes can be unnecessarily costly and time consuming. Though some disputes require a judicial finding and occasionally the substance of the dispute must be submitted to...

Since I began my mediation career just seven years ago, the question that I have heard, almost continuously, from professional friends and acquaintances, personal friends, and from relatives, has been:...