Is a willingness to negotiate a sign of weakness? That seems to be the thrust of the critique of Thomas Frank, the latest prominent leftist critic of the Obama administration. Frank charges that Obama gave away too much to the right, because he stressed the importance of bi-partisanship, when he should have been fighting harder on substantive issues, such as punishing Wall Street bankers, or achieving more economic stimulus. Frank seems to think because the president placed the ideal of bi-partisanship above these other policy goals, he was forced to concede too much to the opposition. 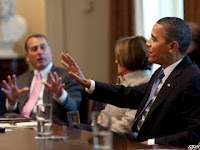 The idea is that Obama’s emphasis on bi-partisanship makes him a bad negotiator. Frank thinks that if you announce to your opponents in advance that you are interested in working out an agreement with them in a cooperative way, that will make the other side even more intransigent, and force you to move closer and closer to their position in order to make a deal.

My experience in litigation and negotiation tells me that it is never a sign of weakness to let the other side know in advance that you are interested in reaching a cooperative resolution of a dispute. It is a sign of strength. In fact it seems absurd to me to suggest that telling the other side you want to make a deal makes you a bad negotiator. More likely, the party who is unwilling to negotiate is a bad negotiator. That person is probably not going to be able to make a deal at all! On the other hand, if you have available some other more effective means of making the other side do what you want without negotiation, such as by declaring war on them or taking them to court, then you might be giving up some of your strength by renouncing those alternatives. But if you have decided that those means are too risky and costly, or you have already entered into a process of give and take, such as is usually required in Congress, then it is hard to see how a belief in the value of bi-partisan agreement can make you a bad negotiator. That’s especially true if you are trying to achieve results that the general public is going to accept. For every Thomas Frank, who is going to complain that the Democrats gave away too much, there are going to be critics on the right who complain that the Democrats rammed through a leftist agenda without adequate consideration of opposing views. And their views count also.

The time you are showing some weakness as a negotiator is when you let the other side know that you have no alternative to making a deal. In other words, there is no harm in expressing a willingness to remain at the bargaining table as long as it takes, but there might be some cost if your side is unwilling ever to walk from the table if you can’t obtain a deal that is acceptable. During Obama’s first term, the weaknesses in the Democratic side’s bargaining power did not come from the Democratic side’s expressions of willingness to make a deal, or from their efforts to achieve bi-partisan agreement. They came from the Democrats’ inability to walk from the table. It is crucial to understand this distinction. There were things the Obama administration decided they HAD to achieve, and that they could only achieve with the votes of a few Blue Dogs or Republicans. On all of those items, they made more compromises than their side wanted: the stimulus, health care reform, raising the debt ceiling, introducing new financial regulations. They made those compromises because the alternative would probably have been no deal at all, and that was unacceptable to the Obama team’s side.

Notice that in the second half of the Obama administration’s first term, there have been fewer compromises, and that has made supporters like Frank happier. (He also says he likes the feisty tone of the re-election campaign.) But note also that basically nothing has gotten done during this Congress, as compared with the first two years. That’s because the Obama administration worked hard to get as much of its agenda enacted as possible during the first two years, and there now remain hardly any issues on which the Democrats HAVE to make a deal. Once the debt ceiling deal was in place, for example, the Democrats can take an uncompromising stand on their view that tax increases must be part of any deficit solution. They don’t have to give anything on this point, because if they don’t, the Bush tax cuts automatically expire and automatic spending cuts take effect that are much less to the Republicans’ liking than the Democrats. (In negotiation parlance, the Democrats have a pretty good BATNA.) So there should be more pressure on Republicans to make a deal this fall. And that pressure exists regardless of how much sabre-rattling the Republicans engage in now. In fact, it appears to me that Republican bluster on the upcoming budget negotiations is a sign of weakness, whereas Democratic expressions of reasonableness and continued willingness to negotiate, are a sign of strength right now.

It’s always easy to second guess the results of any negotiation. But it’s much more difficult to show that a different approach could have gotten either side a better deal. And it just seems flat out wrong to suggest that someone is a bad negotiator because they believe strongly in the value of achieving a result by negotiated agreement. Especially in a democracy where all viewpoints are entitled to be included.

Fighting When in Conflict

Cinergy Coaching by Cinnie NobleFighting with others is not a necessary part of being in conflict, though for many people these are synonymous. The inclination to fight is one reaction...

A Firsthand View of the Middle East: Lessons Of Mediation Provide Insight

First published by Los Angeles Lawyer / June 2004At the end of last year, I visited Kuwait, Israel, the West Bank, and Jordan as part of a 50-person U.S. delegation...

By Jeffrey I. Abrams
Category

What Color Is A Banana? Perception, Bias, And Identity

A quote attributed to author Anais Nin declares, “We don’t see things as they are. We see them as we are.” The truth of these words is apparent in the...