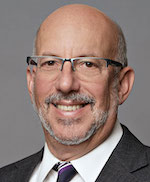 As both an advocate and a neutral, Steve has earned the respect of his colleagues and clients. He has garnered a reputation for his intelligence, a tenacity balanced by an even-keeled demeanor, and a direct, business-minded approach. Known for his ability to grasp the science and technological concepts in both Life Sciences and Technology cases, Mr. Bauer's matters have ranged from surgical, medical, genetic and bio-molecular diagnostic, research and therapeutic technologies (including DNA sequencing technologies); to high-temperature superconductors, high-energy plasma devices, and lithium- ion battery chemistry; to the algorithms used for voice recognition, speech generation, data encryption, satellite communications; to nano- and semiconductor materials and smart phone components. As an advocate, Steve has been lead trial counsel in over 30 trials involving a wide array of technologies, representing emerging companies to multi-national businesses to major research universities. Steve has tried cases in every major U.S. forum, and has argued more than a dozen appeals at the Federal Circuit.