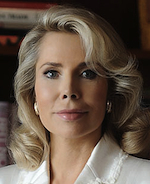 Her Highness the Begum Aga Khan
Begum Inaara Aga Khan is of German origin, a trained lawyer with a doctorate in International Law. She was born on 1st of April, 1963 in Frankfurt/Main, Germany, the daughter of German entrepreneurs, Renate Thyssen-Henne and Helmut Friedhelm Homey. She later adopted the name “Thyssen” from her step-father Dr. Bodo Thyssen.
In 1991, Dr. Gabriele Thyssen married Prince Karl-Emich zu Leiningen and became Princess Gabriele zu Leiningen. Their daughter, Princess Theresa zu Leiningen was born in April, 1992.
In May, 1998, Princess Gabriele zu Leiningen married Prince Karim Aga Khan IV (The Aga Khan), the 49th hereditary Imam (spiritual leader) of the Shia Ismaili Muslims and became the Begum Aga Khan. Prior to her marriage to the Aga Khan and her conversion to Islam, the couple jointly chose the Muslim name “Inaara” (derived from the Arabic “nur”, meaning “light”) for the bride. Their son Prince Aly Muhammad Aga Khan was born in March, 2000.
The Begum is well known for her philanthropic activities since her marriage to the Aga Khan. Alongside her husband, she worked in various educational, cultural and crisis response projects with the aim of improving living conditions of people of all different faiths in developing countries.
The Begum embraces charitable causes, particularly those concerning the rights of women and children, and seeks to better the living conditions of all people in underdeveloped countries. She also promotes understanding and tolerance amongst varied ethnic and religious communities.