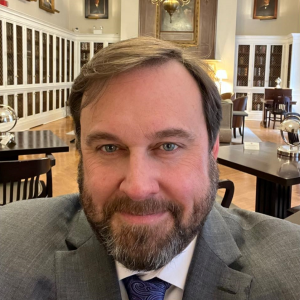 Although he drew on some of his graduate training related to Neurology and Psychology for this article, Edward R. Ergenzinger currently practices patent law in the area of biotechnology with the law firm of Alston & Bird, LLP. He received a J.D. in 2002, Ph.D. in Neuroscience in 1999, and B.A. in Biology and Psychology in 1994, all from Wake Forest University.
Edward Ergenzinger focuses his intellectual property law practice on patent procurement issues in the area of biotechnology. In addition to his experience as a patent attorney, Dr. Ergenzinger has several years of experience in the field of intellectual property law through his work as a patent agent and law clerk while attending law school full-time. Furthermore, his scientific training includes research and graduate coursework in the areas of neurophysiology, neuropharmacology, drug delivery systems, cellular and biochemical neuroscience, and molecular neuroscience.

Dr. Ergenzinger is the lead author or co-author on over 35 scientific and legal publications that have appeared in such venues as Nature Neuroscience, Nature Encyclopedia of Life Sciences, Legal Times, The Scientist, BioPharm Magazine, and Stanford Technology Law Review. He has lectured on scientific topics as part of the medical, graduate, and undergraduate curriculae at Wake Forest University. He has also lectured on intellectual property law as part of North Carolina Bar Association programs, including continuing legal education on developments in chemical and biotechnology patent law.

Dr. Ergenzinger is also active in legislative advocacy efforts relating to patent law through organizations such as the Biotechnology Industry Organization (BIO), for which he serves on their Intellectual Property Counsel's Committee. He has co-chaired panels on patent legislation as part of the BIO 2003 and BIO 2004 conventions that have included members of the House Subcommittee on Courts, the Internet , and Intellectual Property of the House Judiciary Committee. In particular, the panel he co-chaired for BIO 2003 was selected for a special program on Capitol Hill for members of Congress and their staff.