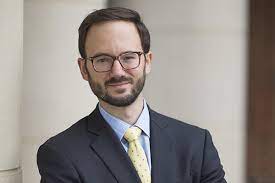 William “Bill” Froehlich ’11 is the current Langdon Fellow in Dispute Resolution and Deputy Director of the Divided Community Project at The Ohio State University Moritz College of Law. Professor Froehlich regularly teaches Moritz’s longstanding mediation clinic where he trains students to mediate and supervises student mediators in several Columbus-area venues; he has also taught courses which focus on dispute systems design. He regularly trains mediators for the Supreme Court of Ohio and taught a mediation course at Pepperdine University.

In addition to recent invitations to present scholarship at Stanford and Yale, Professor Froehlich was awarded the International Institute for Conflict Prevention & Resolution’s 2020 Outstanding Professional Article award for his article (co-authored with Nancy Rogers and Joseph Stulberg), Sharing Dispute Resolution Practices with Leaders of a Divided Community or Campus. Through his work with the Divided Community Project, Professor Froehlich regularly delivers presentations to community, elected, and police leaders, and has trained cohorts of community leaders from more than a dozen campuses, dozens of communities, and five state attorney general offices.

He graduated cum laude from Moritz in 2011 and served on the Ohio State Journal of Criminal Law while in law school. In addition, he worked on public policy consensus building projects as a research fellow with the Election Law @ Moritz program, and served as research assistant in the areas of nonprofit law and professional responsibility. He has an undergraduate degree in math and political science from Denison University. Prior to his work at Ohio State, Froehlich worked in labor relations and practiced labor law as an associate attorney with Muskovitz & Lemmerbrock, LLC. Before beginning law school, he worked as a legislative aide in the Ohio Senate.