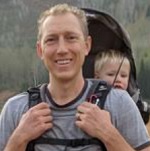 Ben Coltrin was 21 years old when he quit his job to create the Custody X Change software, which helps parents track their custody schedules, create parenting plans, keep tabs on their child's expenses, and more.

Ben has an MBA from MIT Sloan and a computer science degree from California State University, Sacramento. He lives with his wife and four children in Riverton, Utah.