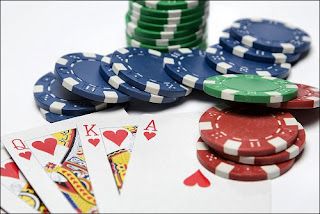 I mediated an interesting case today because the two opposing counsel played poker together with some regularity. What this meant is that they both had a friendly degree of distrust, as well as respect for the other's ability to bluff, on the one hand, and to win on the other. I often see and even describe the negotiation process in a mediation as a game (usually of chess, implying strategic moves in anticipation of reciprocal moves designed to bring the opposing party to where the other wants them to be), but rarely do I overtly reference the bluffing that takes place in poker. Yet it is so apt! Consider the risk taker, the card counter, the one who is too obviously risk-adverse, or fearful of losing it all. These are frequently prototypical personalities represented in a mediation. So it was with much amusement that these two gentleman deftly conveyed their positions to me and then to one another and back and forth until they were fully engaged in the process--leaving with plans for more when additional parties (presumably not represented by part of their poker group) return to the table! There is much to be learned from excellent poker players, but when two of them meet--it's probably best to grab a beer and let it unfold! Happy 4th of July!

read all
Testimonials
"I wanted to thank you for having such an informative site. I have been searching for a book on how to choose a mediator unsuccessfully. You have provided me with the tools I need to feel confident about surviving the mediation process as an individual up against a large insurance company with a team of lawyers. Thanks."
JB
More Testimonials
Most Popular Articles