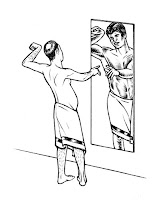 Today's New York Times Magazine had an article about the hazards of confidence, by Nobel Prize-winning economist Daniel Kahneman, adapted from his forthcoming book Thinking, Fast and Slow. Kahneman describes some team-building exercises he engaged in many years ago in the Israeli Army, that were used to predict the leadership qualities of soldiers. It turned out that these exercises had no predictive power whatsoever, yet those who participated and evaluated the results continued to believe in their value, even after seeing their lack of predictive power. It must just seem intuitively obvious that those who exhibit the most skill at such tasks as figuring out how to get the team over a wall, would perform best at leadership tasks in the military. Kahneman calls this cognitive fallacy, the illusion of validity.

Kahneman noticed a similar phenomenon in studying the work of stock traders. He discusses studies showing that stocks that traders sell actually out-perform the stocks they continue to hold. It seems that a lot of stock traders would show just as good or better results if they didn't even bother coming to work. Kahneman once analyzed the performance of a group of investment advisers, finding that none of these advisers managed to out-perform the others when their results were compared over a number of years, suggesting that theirs is a game of chance more than skill. Yet every year, bonuses were awarded based on individual performance, and the best-performing advisers each year no doubt congratulated themselves on the results they had achieved for their clients. These economic and psychological studies show that it is difficult to shake people's belief in their own powers of prediction, or in the validity of the tools they use to make decisions, even when those tools are shown to have no predictive power.

In mediation, we see these kinds of cognitive fallacies, and others, all the time. Parties and their attorneys make predictions of success based on inadequate or even misleading or worthless information. Parties believe, understandably, in the validity of their positions; and attorneys are expected to show confidence in their clients' cases, as well as in their own skills. Part of the mediator's job may be to shake people's confidence in their predictive powers, something that Kahneman's work suggests may be impossible to do. It is also a tricky thing to attempt when the mediator is at the same time trying to show empathy and understanding for each party's predicament. So I might tell a party that they should place great reliance on their attorney's evaluation that they have a 75% chance of winning their case at trial. But they might also want to take into account that the other side's attorney thinks their side has a 75% chance of winning. It's not that either attorney is wrong, it's that the outcome of cases might be a bit harder to predict than people think it is.

In the public sector, the art of compromise isn’t valued as much as it is in the world of private legal conflicts. Those of us who’ve participated in mediations or ser ...more
Prepare for Mediation With Ranges Instead of Bottom Lines

TopCounselingSchools.org compiled information and statistics from a variety of sources to illustrate the effectiveness of divorce mediation. Here are some of the most notable pieces of ...more
Davenport schools say mediation program has reduced suspensions.

The City of Pasadena will be implementing a City Prosecutor Community Mediation Program. This program is designed to help in the early resolution of commun ...more
Alzheimers Q&A: What does elder mediation mean?

read all
Testimonials
"I am a law student at the University of Texas and am currently taking a mediation course. This website has helped so much in my basic understanding of mediation. The articles are such a wonderful source of opinion and commentary on the field of mediation."
More Testimonials
Most Popular Articles