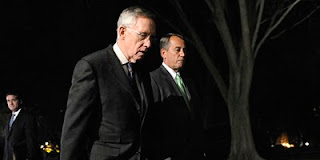 Watching the ongoing negotiations over a budget deal needed to avert a government shut-down, which are approaching the eleventh hour tonight, once again we see a pattern that is common in labor negotiations and many other kinds of negotiations in which parties are forced to stay up all night, and the outcome remains in doubt up until the deadline or even beyond the deadline. It's not just procrastination that creates this dynamic. In the budget negotiations, there are some serious substantive issues at stake, and the ultimate shape of the deal does make a real difference in people's lives. But in terms of large issues such as the size of this year's deficit, the difference between the two sides is tiny, and the outline of the ultimate deal is already pretty well known to the parties. So why is it so difficult to close?

What seems to matter more than the substantive issues are more fundamental issues of political power, and public perception. When this episode is over, who will the public think has won? If the parties fail to reach agreement, who will people blame? Republicans who remember history know that the last time they forced a shut-down of the government, when Newt Gingrich was Speaker, the public mostly blamed the Republicans. This time, however, their Speaker has kept a low enough profile, and enough members of the public are worried that the government is not doing enough to control spending, that Democrats might wonder whether people are going to blame them.

For members of Congress who will have to vote on it, the issue ultimately boils down to whether they really want a deal or not. Will they feel better with a negotiated outcome that does not fully satisfy either side's interests, or would they really rather force a government shut-down to prove that they would prefer to allow a disaster to happen rather than compromise their principles? Neither choice appears to be a good one, and people's principles don't always tell them how to choose between two bad alternatives, neither of which satisfies their principles. The most decisive consideration for many Congressmen may be how their vote will affect their ability to get re-elected next year.

In negotiations over private deals, parties often face a similar moment where the shape of the deal becomes known, and the only question parties have to decide is whether the deal on the table is better than no deal at all. That can be an excruciatingly difficult decision to make, and people don't generally make that decision until they have to. Often late at night.

United Steelworkers ratification vote must be concluded no later than Jan. 24, says employer ...more
Ramirez wants signatures on mediation papers—and he has half a billion reasons for that

read all
Testimonials
"As a cross-cultural instructor I found your website extremely informative and usefull. Thank you. Shall be happy to be updated on your developments. Respectfully,"
Dr. Elena Romine
More Testimonials
Most Popular Articles