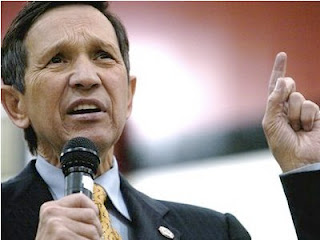 Vickie Pynchon has a fun post up on the Forbes website about Dennis Kucinich's suit against the Congressional cafeteria for breaking a tooth on an errant olive pit found in his sandwich.  Her post got me thinking about how mediation deals with so-called "frivolous" lawsuits.  To start with, I represent enough plaintiffs to have a bit of a problem with the term "frivolous lawsuit."  If a case is obviously frivolous on its face, any judge would immediately see that, and would dismiss the case.  So an obviously frivolous case shouldn't cause enough problems to be worth complaining about.  By definition, then, the kinds of frivolous lawsuits that people complain about are those that have enough potential merit to survive a motion to dismiss, and perhaps embroil the defendant in some discovery, and maybe even force the defendant to have to prepare for trial.  In fact, some so-called "frivolous" lawsuits have resulted in substantial jury verdicts in favor of the plaintiff, which means the people who actually heard and decided the cases didn't think they were so frivolous after all.

As Vickie points out, plaintiffs' contingent fee lawyers do not jump at the chance to file frivolous lawsuits.  They invest a lot of time, and some money, in the cases they file, and they have no reason to take a case that does not have at least a decent chance of recouping that investment.  If Dennis Kucinich asked me to take his olive pit case, I would not automatically dismiss it, but would at least ask a few questions before I decided whether or not I was interested.  Just how careful is this kitchen?  Did they have any notice of similar problems?  How did they describe this sandwich?  How much pain and expense did you go through to fix your tooth?  Without more information, we can't make a definitive judgment about it.  And we shouldn't be too quick to mock it until we know all the facts.  People might not be so glib about the way they hold up the famous McDonald's coffee-spilling case as the epitome of a frivolous lawsuit, if they tried to imagine the suffering they would experience by receiving third degree burns on their genitalia, or knew that McDonald's had received numerous complaints about the excessive temperatures at which they kept their coffee.

Still, even if we recognize that so-called "frivolous" lawsuits may have more merit than they are credited with, experienced trial lawyers and mediators have also seen plenty of cases that cost the plaintiff and his or her attorney way more in time, money and heartache than they can possibly recover if they take the case all the way to trial.  And that's why Vickie's description that she says she sometimes uses in mediation--asking the parties to imagine all the possible grievances, large and small, that all the people in the world experience, and then asking them also to recognize that the vast majority of those grievances do not give rise to legal claims--is a great way of putting many problems in perspective.  I had a plaintiff in my office recently, with whom I pleaded to understand, that his grievance against his [employer][landlord][customer][partner][you choose] was just not the kind of claim that was likely to result in a decent payday for him at trial.  And his lawyer fully agreed with me.  Much better to put it behind you, I suggested, for whatever amount we can persuade the defendant to pay.

So this is how mediation can solve the problem of frivolous lawsuits.  We help educate plaintiffs on the real costs and risks of continued litigation, and we also help educate defendants on the realities that cases they believe lack merit are not always seen that way by a jury, and that it sometimes takes a lot of effort to persuade the fact finder that the case lacks merit.  Mediators can play an important role in reducing the burdens on the courts and the parties of handling many cases that are not worth litigating.

On the other hand, we mediators talk out of both sides of our mouth on this issue.  Because in addition to helping persuade people to suck it up and stop wasting their time on cases that are not worth litigating, we also believe in taking the time to understand some troublesome problems even though we know they would never be allowed in the front door of the courthouse.  Mediation has huge, mostly unrealized potential, to help people solve family disputes and business disputes and many other kinds of disputes, that present real problems, and can cost families or businesses huge amounts of money, but might not give rise to a cognizable legal claim.  To solve those real problems, and also to solve the real problems that wind up in court, whether or not they involve valid legal claims, we need to use the skills of listening, empathy, and creative problem-solving.

My goals in mediation include peace, justice,and perhaps reconciliation, in addition to efficiency.  If I can achieve those goals by persuading a party that a case is not worth pursuing in court, I will do it.  But if I can only achieve those goals by paying close attention to someone's description of a conflict to which no judge would give the time of day, and helping the parties design a solution to that problem, I will do that.  Thus mediation can open up a new dispute resolution process for conflicts that parties are not allowed to bring to court, while at the same time it can eliminate some of the court cases that have trouble justifying their existence.

UPDATE (1/30/11):  Kucinich has reportedly settled his suit for the cost of his out-of-pocket expenses (apparently extensive dental surgery bills that were not covered by insurance).  That raises a couple of possibilities.  Perhaps Kucinich backed down due to adverse publicity.  Or perhaps he was never after a big settlement or judgment in the first place, but felt compelled to sue because the cafeteria's carrier would not honor the claim until they saw he was serious enough to sue.  Either way, this outcome reinforces the idea that it is best not to jump to conclusions about the value of a claim until we know the facts.

One of the most common mistakes I see in mediation is when a party comes into the process with a firm “bottom line” in mind. ...more
Atlantic City Casino Property Tax Break Ordered to Mediation

BUFFALO, NEW YORK, US – The fate of a historic grain elevator damaged by a Dec. 11 windstorm was ordered by a judge to mediation on Dec. 27, according to a WGRZ-TV report. The 125-year-old Grea ...more
As legal fees grow beyond $7 million, Buffalo Diocese bankruptcy case heads to mediation

The Buffalo Diocese, which has racked up more ...more
Camarillo seeks to disband rent commission for mediator on landlord, renter disputes

On January 1, 2022, leave under the California Family Rights Act (“CFRA”) will be expanded to provide employees with up to twelve weeks of job-protected leave to ...more
Eviction mediation program sees ‘tsunami’ of activity in November

An agency tasked with handling mediation for tenants with unpaid rents is seeing an influx of new cases as eviction protections put in place due to th ...more
India Mediation Bill: Not getting the Act together

While it contains many pluses, the Bill needs improvement in some crucial places ...more
Alzheimers Q&A: What does elder mediation mean?

Testimonials
"I have been an avid supporter of mediate.com for well over a decade. It is where I have chosen to have my website and it is where I encourage other mediators to have their websites. It is where cutting edge articles are written by some of the brightest minds in our field. It is where mediators can go to get up-to-date information on what is happening, not only in the field of mediation but the entire field of conflict resolution."
Nina Meierding
More Testimonials
Most Popular Articles