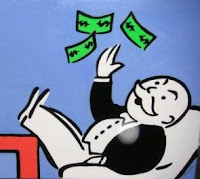 A big battle is shaping up in Congress in the next few weeks over extending the Bush tax cuts.  If Congress does not act before the end of the year, all of these tax cuts will expire automatically, an outcome that is favored by hardly anyone.  Instead, Republicans would prefer that all of the tax cuts be made permanent, while Democrats favor making the tax cuts for those making under $250,00 a year permanent, while allowing rates to rise for those making above that amount.  There are also a number of intermediate possibilities: the most prominent one being floated would allow the middle class tax cuts to become permanent but extend tax cuts for the wealthy for a couple of years.  But if the deadline is allowed to pass, neither side will obtain its preferred resolution, or any intermediate resolution.  Instead, all of the tax cuts will simply expire by operation of law, and the American people will probably be mad at both parties for allowing everyone's taxes to rise.

Compare this situation to the typical scenario in private disputes.  In those cases, both parties may want to avoid the cost and risks of trial, but they still retain the hope that if the case goes to trial, their side might prevail.  In the tax debate, however, both sides know that if they let the deadline pass, both sides will certainly lose.  You might think that would make this tax debate easier to resolve, but it doesn't appear that it will be easy at all. Why?

What seems to happen in politics is that political preferences become positions, and positions take on symbolic importance.  The relative ability of each party to achieve its positions also demonstrates its political power.  (And since politics is merely a public manifestation of how we act in life, the same impulses tend to operate in private conflicts as well.)   Mediators recognize the absurdity of attaching enormous significance to the question whether millionaires should be taxed at a rate of 35% versus a rate of 39%, considering that as recently as the 1960's, the highest marginal income tax rate was over 90%.   Yet even when mediators, and perhaps the parties themselves, cannot explain the difference between the two numbers they are fighting over, they often find that parties unable to budge from those numbers.  In the case of taxes, one side has staked out a position that taxes are already too high, and any increase in rates would violate its cherished principles, while the other side has taken the position that allowing the highest marginal rate to increase is an important demonstration of the need to undo what the previous administration did, and restore more progressivity to the tax system.  Furthermore, both sides are now using language that will make it harder to achieve any sort of resolution.  Emboldened by their electoral victories, Republicans are marching back to the lame duck session asserting that they will refuse to compromise on this matter of principle.  Meanwhile, supporters of the Democrats' position are already expressing their disgust at any sign that the Democrats may "cave in" to any of the Republicans' demands.  Again, remember that both sides lose if they can't make a deal, so all this posturing could amount to a game of chicken, in which one side might have to give in to avoid disaster.  As in all games of chicken, the "winner" is the one who is most willing to risk mutual destruction.  Alternatively, both must try to find a face-saving result that will allow both sides to claim that they won, or else they will be attacked by their own constituents for displaying weakness or betraying their principles.

Could this sort of posturing have been avoided?  Only if the parties had been able to frame the debate in a way that recognized each sides' true interests, instead of as a contest of wills.  What should have allowed a more rational debate to occur is the recognition that both sides share some interests, and also that each side has interests that internally conflict.  Republicans say they are interested in stimulating the economy and reducing the size of government, but they also say they are interested in reducing the deficit.  Tax cuts might serve one purpose but make it harder to achieve another.  Democrats are also interested in the conflicting goals of stimulating the economy and reducing the deficit, but they would prefer to stimulate the economy by increasing public works spending, rather than reducing rich people's taxes.  The parties' common interests should suggest numerous ways of resolving the issue of an appropriate tax rate for millionaires in a way that satisfies their shared goals of long term deficit reduction and short term economic stimulus.  Wouldn't it be a tremendous sign of maturity in our political debates if both sides could announce that they have agreed on a result that satisfies a large measure of their political goals?  Instead both sides have fallen into the trap of trying to achieve a result that they can portray as a victory over the other side.  Both sides have also tried to taint any other result as an illegitimate compromise (see my prior post on why you want to avoid using the word "compromise"), or as one side "caving in" to the other's demands.  This kind of language makes it harder to solve what should be a solvable problem.

Private mediations often devolve into distributive bargaining contests, in which each side is asked to "cave in" to the other's successive demands.  At the end of that back-and-forth process, when the last party blinks, we can sign the agreement and go home.  We settle a lot of cases that way, but in my view, we could do even better if we are not too anxious to get involved in that kind of contest.  Better to spend more time identifying the parties' respective interests and goals, their ability to achieve those interests and goals through litigation, and any other costs and risks of failing to reach agreement.  Once that is done, a range of realistic and advantageous settlement possibilities should become apparent to both sides.

read all
Testimonials
"My search ranking rose to the top of Google with Mediate.com's expertise!"
More Testimonials
Most Popular Articles