People instinctively resist the idea of compromise.  They want what they believe they are entitled to.  They want justice.  If I as mediator suggest to people that they can't have what they want or deserve, or that they should simply back down on a matter they feel strongly about, they are naturally going to resist. Therefore, instead of telling litigants that they have to compromise, I prefer to tell them that I am trying to get a better result for them than they could obtain by taking their lawsuit to its conclusion.  I help them understand the costs and risks of pursuing their claims to trial, so that they can see that settlement may actually represent a victory. 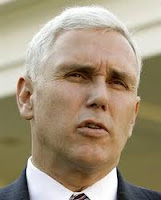 We see the same resistance to compromise in politics.  Many Democrats are said to be disillusioned because their leaders watered down their health care and other reform proposals too much.   They would have rather seen the administration fight harder, instead of working so hard to get agreement with the other side.  At the same time, Republican stalwarts have no stomach for compromise either.  Representative Mike Pence told an interviewer recently that "there will be no compromise on stopping Democrats from growing government and raising taxes. And if I haven’t been clear enough yet, let me say again. No compromise. . . . The time to go along and get along is over."

This kind of talk is disheartening to mediators, who know that we never accomplish anything without some give and take.  It seems doubtful that politicians can accomplish much either without making some accommodations to the opposition.  Yet we have to recognize that partisans in public debate, or in private disputes, should not be expected to give in on matters of principle.  They need to either impose their will on the other side, or reach an agreement that can be interpreted as a victory.  For example, in the book Beyond Reason, there is a chapter on how a border dispute between Ecuador and Peru was resolved in an ingenious way, giving one country political sovereignty over the disputed area, and the other country property rights.  In that way, both sides were able to claim victory.

Agreements that are cast as compromises are more likely to fall apart.  The Compromise of 1850 only held off the Civil War for a few years.  The Korean Armistice created an uneasy peace that has left fundamental issues unresolved.  Some private agreements also merely set the stage for future disputes, or leave participants feeling dissatisfied.  Telling people that they have to compromise may cause them to walk out of the negotiations, or lead to an agreement that they feel was imposed on them unfairly.  I think it is generally better to help both sides win the negotiation, and obtain an agreement that they can feel good about.

Bristol, UK – GetMediation Bristol, in a website post, has echoed the importance of workplace mediation in Bristol and just anywhere else. ...more
Being Prepared For Mediation

Mediation is one of the aspects of litigation that can be confusing for parties in a lawsuit, but there are few rules to understand about the process that can make it a lot less daunting. ...more
Christina Haack and Ant Anstead to Attend Mediation in Custody Battle Over Son Hudson

A nonlawyer mediator can reason with counsel and parties about the weakness of arguments from a nonlegal perspective. ...more
Nonprofits, schools train teens to settle their own arguments in hopes of preventing gun violence

Barner has been participating in conflict resolution training through a nonprofit called YEAH Philly. ...more
Why I volunteer: Tommy Oakman on The Mediation Center

Becoming a volunteer community mediator was a personal goal for me and a best natural step to take toward helping people. ...more
Can medical negligence cases be resolved through mediation?

Litigation continues to be the major means by which medical negligence disputes are resolved in Ireland. While the dominant policy agenda focuses on the direct financ ...more
Dissent and Dialogue: The Role of Mediation in Nonviolent Uprisings

While both mediation and nonviolent resistance have been the subject of significant scholarly work, the connection of the two fields has received less attent ...more
Former MSU star Adreian Payne shot while unarmed, trying to mediate domestic dispute

Former Michigan State star Adreian Payne was shot and killed as he stood unarmed next to his car while trying t ...more
Read & Search All News
Subscribe to This Week in Mediation
Weekly email newsletter

read all
Testimonials
"I am a law student at the University of Texas and am currently taking a mediation course. This website has helped so much in my basic understanding of mediation. The articles are such a wonderful source of opinion and commentary on the field of mediation."
More Testimonials
Most Popular Articles