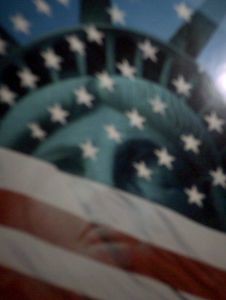 In the days after the towers fell on September 11, 2001, Americans everywhere came together to honor the dead and demand justice. The world stood beside us, sharing our shock and grief.

What struck my ear, as a mediator, were his words on the importance of setting aside our differences to address the tough issues America faces — economy, jobs, health care, social issues, civil liberties, national security:

The times are too serious, the stakes are too high for this same partisan playbook. So let us agree that patriotism has no party. I love this country, and so do you, and so does John McCain.

He invited Americans to focus on the future and our shared interests rather than on the positions that have riven us, acknowledging the hard work ahead:

America, our work will not be easy. The challenges we face require tough choices. And Democrats, as well as Republicans, will need to cast off the worn-out ideas and politics of the past, for part of what has been lost these past eight years can’t just be measured by lost wages or bigger trade deficits. What has also been lost is our sense of common purpose, and that’s what we have to restore.

We may not agree on abortion, but surely we can agree on reducing the number of unwanted pregnancies in this country.

We may not agree on abortion, but surely we can agree on reducing the number of unwanted pregnancies in this country.

The — the reality of gun ownership may be different for hunters in rural Ohio than they are for those plagued by gang violence in Cleveland, but don’t tell me we can’t uphold the Second Amendment while keeping AK-47s out of the hands of criminals.

I know there are differences on same-sex marriage, but surely we can agree that our gay and lesbian brothers and sisters deserve to visit the person they love in a hospital and to live lives free of discrimination.

You know, passions may fly on immigration, but I don’t know anyone who benefits when a mother is separated from her infant child or an employer undercuts American wages by hiring illegal workers.

But this, too, is part of America’s promise, the promise of a democracy where we can find the strength and grace to bridge divides and unite in common effort.

Mediation will play an important role in resolving the many disputes that will follow the Covid-19 triggered recession.The flexibility of solutions that it offers mean that parties can find creative so ...more
Pepperdine Caruso School of Law Announces $1 Million Gift from the Honorable Daniel Weinstein (Ret.)

The Honorable Daniel Weinstein (Ret.) has made a generous ...more
FIFA agrees to mediation in dispute with TTFA

FIFA has agreed to settle their dispute with the Trinidad and Tobago Football Association (TTFA) through mediation. According to lawyers from New City Chambers represent ...more
Mediation Perspectives: Moving Training from Room to Zoom

In the context of COVID-19-related discussions about moving mediation training online, this blog reflects on key strategic and operational questions one should ask to make this ...more
To understand each other, look through each other’s ‘windows’

People have such different histories that it is important to try to unearth how they formed their beliefs. ...more
Another healthcare mediation success

NHS Resolution's claims mediation service was launched on 5 December 2016 and has since then proved extremely successful as a means of supporting patients, families and NHS staff in working towards the res ...more
Supreme Court Foreclosure Guide Touts Mediation, Tech

The Ohio Supreme Court’s guide on home foreclosure disputes promotes mediation and technology as major avenues where local courts can forge remedies between homeowners and lende ...more
Mediation program for landlords, tenants set to run through at least October

A free mediation program to assist landlords and tenants throughout the COVID-19 crisis has already served mor ...more
John Sturrock QC reflects on mediation and negotiation in new book

The stress and uncertainty of COVID-19 has amplified ongoing conflict and created new conflicts. P ...more
Read & Search All News
Subscribe to This Week in Mediation
Weekly email newsletter

Featured Blogs
read all
Testimonials
"As a mediation trainer of several thousand people, I always encourage newly trained mediators to take advantage of the vast resources and experience contained within Mediate.com. There is nothing out there that even comes close."
Jim Stovall
More Testimonials
Most Popular Articles