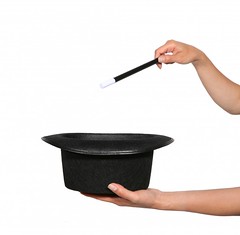 A skilled magician can make us see what isn’t there. We watch the silver dollar vanish but not the magician deftly palm the coin. Magic is filled with tricks — games played with our perception as the magician misdirects our attention.

It is magic’s ability to manipulate our awareness that has earned it not only the delight of audiences but also the attention of the field of neuroscience, according to “How magicians control your mind,” an article in today’s Boston Globe:

As magicians have long known and neuroscientists are increasingly discovering, human perception is a jury-rigged apparatus, full of gaps and easily manipulated. The collaboration between science and magic is still young, and the findings preliminary, but interest among scholars is only growing: the New York Academy of Science has invited the magician Apollo Robbins to give a presentation in January on the science of vision, and a team of magicians is scheduled to speak at next year’s annual meeting of the Society for Neuroscience, the world’s largest organization of brain researchers.

The ability to manage our attention better and to close the gaps in our perception holds implications for many kinds of activities and endeavors — think, for example, of driving, just to name one that demands an alert and attentive actor:

The control and management of attention is vital in all sorts of realms. Airplane cockpits and street signs would be designed better, security guards would be trained to be more alert, computer graphics would feel more natural, teaching less coercive.

And only imagine what the management of attention might mean for lawyers and judges, for mediators and negotiators.

The Boston Globe article includes links to three videos that demonstrate our cognitive gaps - and how easily our attention gets diverted. In one a magician demonstrates his skills in misdirecting his audience’s attention at a gathering of scientists; the second depicts two magic tricks, including a vanishing ball illusion; and the third is the well known gorilla-and-basketball video, discussed here before at Mediation Channel.

read all
Testimonials
"I want to thank you and everyone at Mediate.com for offering the services you provide at such a reasonable rate. I've been inundated lately with calls from other webpages who are upping their fees to crazy levels, in my opinion, and I quote to them what I pay to mediate.com every time. Thank you for your help in getting out the word about my practice without taking me to the cleaners. P.S. And I even qualified for really inexpensive malpractice insurance through you, too."
Unmani Sarasvati
More Testimonials
Most Popular Articles