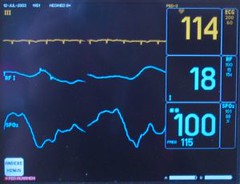 All Things Considered, a National Public Radio news magazine, recently aired a program on the benefits for both patients and the medical profession when hospitals find better ways to respond to medical errors and unsatisfactory patient outcomes in "Practice of Hospital Apologies Is Gaining Ground".

What stands out is the reaction of one patient interviewed for the program whose doctors failed to make an early cancer diagnosis. Instead of denying responsibility for the error, the hospital's attorney arranged a meeting with the patient, the patient's husband and her attorney, and the two oncologists who treated her. The patient had this to say about the experience:

My husband and I both left that meeting feeling like a million bucks. I was heard that night. That's all I really wanted. I wanted them to know that this was not right, what happened to me.

The hospital's attorney, also interviewed for the story, emphasized how important these conversations are for everyone involved. Looking back on a case early in his career in which a jury returned a defense verdict for his client, he remembered,

After the jury was dismissed, the lady who sued my client leaned across the podium and said, 'If you had only told me everything I heard in this courtroom, I would never have sued you in the first place.' That really left a mark on me, and for 20 years I wondered why we never talk to each other.

The benefits of these programs are numerous. Not only does everyone save money on legal costs, and not only do both sides learn important information from each other during the course of the conversation, but this willingness to be open encourages medical staff to come forward to report errors, which means greater safety for patients.

Listen to the story here--it's well worth the six minutes it takes to hear those involved describe just how invaluable talking to each other can be.

Tenants in Washington now have an additional 30-day stay from eviction if they’re seeking help for past-due rent after the governor extended the bri ...more
Mediation for Sept. 27 COVID-19 vaccine mandate

A mediator from PERB (the Public Employment Relations Board) is bringing together representatives from PEF and the Governor’s Office for Employee Relations (GOER) today in an attem ...more
New Hampshire circuit courts enlist mediation as eviction-reduction tool

The program would allow some COPA and BIA complaints to be referred to a community mediation progr ...more
Dayton could send ‘mediation responders’ to 911 calls

A proposed pilot program in Dayton could pioneer a new way of responding to some types of 911 calls for police service that involve lower-level disputes ...more
Quebec introduces pilot project for free youth protection mediation service

Montgomery County Juvenile Court said over 50% of juvenile court cases are diverted and a portion of these ...more
Mediation next milestone in Cortez Bridge battle

Legal representation for a group of five complainants — including the Florida Institute for Saltwater Heritage, a Cortez nonprofit — and the Florida Department of Transportation will meet with m ...more
Mediation Specialist Shares Tips as Hawai?i's Eviction Moratorium Ends Soon

The statewide eviction moratorium that has been in place since April 2020 will come to an end on Aug. 6. T ...more
Read & Search All News
Subscribe to This Week in Mediation
Weekly email newsletter

read all
Testimonials
"One of, if not the best, sites on the subject of Mediation I have had the opportunity to visit. I am interested in becoming a mediator and this site is encouraging and educational."
LJ Freitag
More Testimonials
Most Popular Articles