Secular humanists need not fear--the same results were produced when participants were instead primed with concepts relating to civic responsibility. Researchers used word games to surreptitiously introduce these concepts to their subjects. Interestingly enough, exit interviews revealed that participants were unaware that they had been primed. 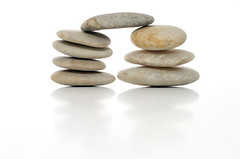 What I find fascinating about the study is the extent to which human behavior can be so readily influenced. And it certainly raises intriguing possibilities for the mediator's opening statement, already important for the extent to which it can shape the negotiations to follow, as attorney-mediator Christopher Annunziata discussed recently at CKA Mediation & Arbitration Blog. All the more reason for mediators to carefully consider the words they choose to frame the conversation.

Featured Mediators (469)
List Here
Mediation in Today's News
When Mediating in Colorado, Sign a Settlement Memorandum During the Mediation

Testimonials
"Mediate.com is the best site in the field ... period. It provides timely and reliable up-to-date news and cutting edge analysis. I look forward to it every week and use it regularly as a “one-stop- shopping” resource. I routinely refer my clients to it so they can keep abreast of our fast evolving field."
Sam Imperati
More Testimonials
Most Popular Articles