But given the lengths to which people will go to avoid confrontation or tough conversations, honesty may be the first casualty in human interaction.

Besides, is lying really always wrong? What if it serves noble ends? Isn't deception just a social lubricant, allowing us to get along? Shouldn't we lie to prevent harm to another? If lying is always wrong, then are studies in human behavior ethically indefensible? What about undercover police work? Or the bluffing, puffery, and lowballing that can characterize negotiations? 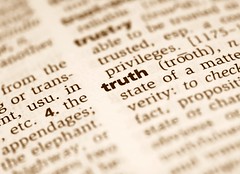 (And let's not even get started on deception in mediation.) Despite what we tell our children about lies, deception may be indispensable.

But a movement known as Radical Honesty proposes instead that the truth will set us free: it calls for no-holds-barred, "direct, open and honest conversation" as the best way to build meaningful relationships.

Journalist A.J. Jacobs recently took up the challenge. In "I Think You're Fat", an article from the July issue of Esquire, he describes his experiment in Radical Honesty and its impact on his work and personal life. Jacobs discovers one upside: "One of the best parts of Radical Honesty is that I'm saving a whole lot of time. It's a cut-to-the-chase way to live." The downside? Radical Honesty can be downright cruel. An acquaintance recovering from a recent tragic loss seeks Jacobs' professional advice on poetry he's written. Jacobs cannot bring himself to tell the truth: the poetry stinks. When faced with a choice between honesty or compassion, Jacobs opts for compassion.

Read Jacobs' essay and ask yourself what choices you might make yourself. It'll leave you thinking--and that's no lie.

Testimonials
"The service provided by Mediate.com is an important one because they go beyond allowing mediators to "advertise" and be easily located in the area they are needed; Mediate.com also educates those whom are looking for an expert mediator and helps them locate one near them."
Scott Rowlett
More Testimonials
Most Popular Articles