In The Eumenides, the final play of Aeschylus’s trilogy (see my two prior posts on the first two plays), Orestes has flown to Apollo’s temple, pursued by the hideous, disgusting Furies.  While they are sleeping, Apollo appears and tells Orestes to go to Athens and beg Athena for help (again from the Ted Hughes translation):

There you shall be judged
By men that I have appointed.
And there, inspiring the tongue,
I will free you.
I commanded you to murder your mother.
Now I shall draw, as in a lottery,
From all your tossed-up days and nights,
Deliverance from the crime.

Orestes presents his case to Athena, who immediately recognizes its complexity.

This case is too deep for a man.
Nor should I let the law, like an axe,
Fall mechanically on a murderer.
Especially since you came to my temple.
As a supplicant
Fully cleansed of your crime.
But your accusers have to be heard.
And if their case fails–what happens to their anger?
It whirls up into the air, it blackens heaven,
It falls like a plague on Athens.
Falls as a curse on Athens.
How am I to deal with the dilemma?
Let me select a jury of the wisest
Among the citizens of this city.
Let them be the first of a permanent court
Passing judgment on murder.
They shall be sworn in
To integrity and truth.
They shall have the full use of my wisdom.

The Furies are skeptical of this proposal, fearing that “soft-headed” juries who exculpate criminals will only give license to murderers.  They see Athena’s plan as a threat to the divinity of Justice.  But Athena is determined, returning with twelve citizens “to establish justice now, and throughout all time to come.”  Apollo appoints himself defense counsel, and the Furies serve as the prosecution.  Athena grants the Furies the right to present their case first.  Apollo argues the case for Orestes, and when he is done, says that he will abide by the jury’s verdict.  The Furies, however, warn that the jury better remember their oath, and “the primal laws of the earth.”  While the jury is deliberating, the Furies tell Apollo that they will not accept an adverse verdict as legitimate, and will curse the land and city if they lose.  (Think of the outcry after the jury acquitted the police officers in the first Rodney King trial; or after O.J. Simpson was acquitted in his first trial.  Aeschylus reminds us that these criticisms of the jury system began from the moment of its inception.)
When the jury comes back evenly divided, Athena casts the deciding vote for Orestes, for reasons that seem to reflect her own prejudices, but nevertheless put a divine stamp on the outcome.  She must then calm the Furies, who think the old laws have been crushed:

Can we be shut away inside the earth,
Voiceless and nameless
Under a temple paved with words,
Under columns of reasonable persuasion?

Athena reassures the Furies that they will not be forgotten, but instead will be transformed into kindly creatures.

The time of brute force
Is past.
The day of reasoned persuasion
With its long vision,
With its mercy, its forgiveness,
Has arrived.
The word hurled in anger shall be caught
In a net of gentle words.
The angry mouth shall be given a full hearing.
I understand your fury.
But the vendetta cannot end,
The bloody weapon cannot be set aside
Till all understand it.

Athena promises that this new system of justice will serve as the foundation of great fortune for Athens, as she leads the former Furies, who go willingly to their new home, a cave under the city. 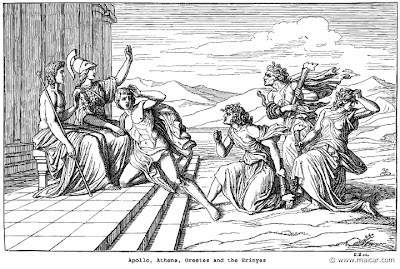 One could view Athena as a kind of divine law-giver, passing down to the mortals the rules they need to govern their lives.  But she is a much different kind of law-giver than the Old Testament God who passes the Commandments to Moses.  She hands out procedural rules, not substantive commands.  And she takes pains to make sure that the parties in conflict–Orestes (and his attorney Apollo) on the one hand, and the Furies on the other–agree on the fairness of the procedure, and accept the result.  She empowers the jury to absolve Orestes, for whatever reasons they may see fit to employ, and she transforms the Furies.  In all these ways, Athena functions more like a mediator than a judge, even though she does cast the deciding vote.  What is revolutionary in The Eumenides is the system of law Athena bequeaths: the source of the law is now a jury of wise citizens, not a god or king, which is fitting for a democracy; and the tools of the law are reason and persuasion, not ancient rules of retribution.
How well has Athena’s new system of justice held up over the ensuing 2500 years?  How fully has it transformed the previous system?   Have we yet grasped the power of wisdom and kindness, or are we still mired in deterministic law based on force and revenge?  Are we now at a point where we need another transformation of the court and jury system in favor of an even more inclusive, just and harmonious process?  The rise of the ADR movement, as well as contemporary complaints that our court system is too complicated and expensive, and that it often fails to provide needed finality and peace, suggest that many are looking for an alternative to this long-standing system of justice. Would a modern Oresteia help us find it?

I took a wonderful Class this Week given by Peter Robinson, Dean of the Straus Institute of Dispute Resolution at Pepperdine University and Robert Benjamin from Portland, Oregon. Peter spoke...

This is another in a series of updating articles on Legal Mediation News by Mediate.com News Editor, Keith Seat. See our related Newsletter Service for your clients and referral sources.Discovery...