A Way Out Of The Prison Of No Man’s Land. Use The Key Of Music 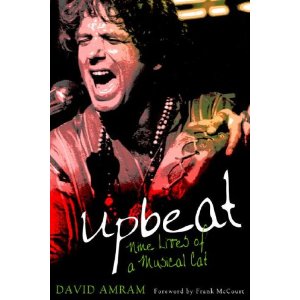 Musician David Amram tells a story in the beginning of his book Upbeat: Nine Lives of a Musical Cat, and that story holds a big clue about why I want to include music in conflict resolution. I first heard a quick reference to his adventure several years ago, found the book to read more details, and since then have told Amram's story many times.

In
the spring of 1978, he was stuck in the New Delhi Airport in India. He
was supposed to be performing in Tehran, but instead was held up in this airport,
in a room called No Man's Land,

the nickname given to the isolated
room … where travelers whose connecting flights were canceled or
delayed for more than 24 hours were housed and not allowed to leave the
airport since they had no visa for India … .

In addition to
delayed travelers, he was housed with "suspected drug dealers, … and
criminals arrested in the airport who were waiting to be extradited."
The carpet upon which he sat was "ratty," and he was hungry and thirsty.

The situation gets even worse.

A
young man in a navy blue uniform … strode into the room. 'Ladies and
gentleman,' he intoned in a cultivated British accent. [The lieutenant
announced his name and asked] 'Whom among you would like a glass of
water?'

'Paracalo Kyrie. Theepsau' ('Please sir. I am
thirsty,') cried an elderly Greek woman, raising her hand as she stood,
much like the statue of Athena.

'That will be one dollar, U.S.
currency only,' said [the lieutenant] in curt tones. Every one of the
involuntary citizens of No Man's Land groaned. A woman from Scandinavia put down her copy of Rolling Stone Magazine and came over to me.

'Do something,' she said. 'This is dreadful.'

What did the musician do? He used music to harmonize the situation.

I took off the Guatemalan ocarina I still wear around my neck today … . I began playing 'Son de Palo Volador,' an old folk song I learned when I was in Guatemala.

[The lieutenant] stopped haggling over the proposed dollar … . He walked towards me, beaming.

… [The officer said,] 'What a lovely tone you get from that tiny instrument. Let me fetch a bonsri (wooden flute) from the gift shop.'

He … returned, clutching an armful of wooden flutes. … One of the stranded travelers took a small push-button accordion from her bag and joined in. A half-hour later, other airport employees … joined us, playing tablas and other instruments borrowed from the gift shop. The Scandinavian woman began to dance and the rest of the temporary residents of No Man's Land joined in … . At the conclusion of our World Premiere and final performance, [the lieutenant] came over and shook my hand.

'This was simply a marvelous time,' he said. 'I'm having the airline buy everyone dinner.'

The captives in No Man's Land all applauded. The woman from Scandinavia came over to me.

'I followed a universal principle,' I said. 'Many Native Americans have a motto; Respect, Love, and Sharing. That's all you need to know to make music anywhere with anyone. …'

'Yes, but how did you know what to do, when those people from India joined in with us and began to play those exotic melodies and rhythms?'

'Very simple,' I said. 'I listened very carefully to them. It's about sensing what to do and what not to do and following the ancient principle of how to make music with others when they are playing, which is simply, when in doubt … leave it out!'

Good advice for conflict resolution, too, don't you agree? When in doubt, leave it out. Music has many lessons for conflict professionals as I will continue to illustrate here at Brains on Purpose.™

In my last post here, I talked about how much of the brain is engaged by music. A truly brain-friendly mediation will facilitate that high level of neuro-involvement. Music is one medium that can raise the brain's attentiveness to the process—and open up pathways to new solutions, just as it did in the New Delhi Airport.

Note: Click to watch the trailer of the upcoming film on the life of David Amram. From YouTube:

This is the trailer for the upcoming documentary about the life and times of Classical/Jazz/film score composer/conductor/jazz french hornist/world musician and Beat novelist Jack Kerouac's musical collaborator, David Amram.

Say What? Marketing Feedback for Mediators

Got a note recently from Herbert Ong of Kudosworks.com, the referral and testimonial tool I profiled last year. He let me know that they had addressed my original concern and...

From the Blog of Phyllis G. Pollack. If I had to list one thing that is a must for mediation, it would be “preparation.” I raise this again for the...

Opening Statements by the Mediator

ADRHub Audio Blog It's important in the mediation process, irrespective of the model, for the mediator to explain how she works in an opening statement. There are two reasons for...