If you’ve been paying attention to the news from the Middle East lately, you’ve probably read about large peace demonstrations in Israel, as well as the violent attack earlier this week in Egypt against the Israeli embassy. You might not have heard about a more hopeful event in Israel this week organized by some of these peace movement leaders. I saw something about this on David Harris-Gershon’s blog on conflict resolution in Israel and the Middle East. The event was called 1000 tables. The organizers set up roundtables in town squares in about 30 different cities, each table holding 10 chairs, and each group led by a moderator who might be a coach, group leader or mediator.

Participants had the opportunity to meet strangers, express their views, and listen to a variety of other perspectives. The contents of the conversations will be published in various social media. Traditional media doesn’t seem to know quite what to do with a story like this one, perhaps because it lacks a traditional narrative. This does not seem to be the kind of conflict or resolution that the media like to report. It has no winner or loser. There is only . . . talking, and perhaps a little more understanding. That does not fit in with story-telling conventions that require heroes, villains, and dramatic conflict. So a story about a peace protest would be more likely to make the front pages if it inspires violence or confrontation of some kind. Note that the Jerusalem Post story about this event focused on a minor confrontation that occurred when the mayor of Tel Aviv dropped by, rather than on the content of the conversations. By looking for that type of incident, the paper might have missed the excitement inherent in the spectacle of hundreds of people, in a contentious society, just sitting around tables talking and listening to one another.

Think about this: Isn’t the whole idea of a PEACE MARCH somewhat of an oxymoron? Any march or demonstration is just a group of people inspired by a particular cause presenting their cause in a forceful, in your face way that is likely to inspire counter-marchers and confrontations with those of opposing views. Sometimes that might be the most effective way to promote a cause, even the cause of peace. But if people really want to promote the idea of peace, they need to organize more events like the 1000 tables event, that actually embody peace and are intended to inspire dialogue rather than confrontation.

(See also another report in Haaretz) 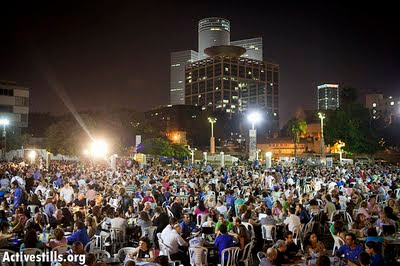 Embrace Failure: Get A Good Result in Mediation

JAMS ADR Blog by Chris PooleInstead of going into a mediation like it’s “déjà vu,” try to think about it as “vuja de.” In other words, it won’t be the...

The Future of Mediation

It is impossible to talk about the future, present or past of mediation without putting some sort of definition to that term.  Clearly, mediation as dispute resolution has been around...